Isn't it sometimes strange, when you think up something and it turns out almost exactly as planned? Spooky.

It's fair to say, that what you can see in the clip for "Future Noir" is pretty much what Stefan Fähler, São Paulo native Dácio Pinheiro and I brainstormed, having a beer after a beautiful day in the brazilian art park of Inhotim in March. Back then, Stefan was busy on the design of Hanin's album cover and press pictures and we thought, why not make a video, too?

Dácio returned to Berlin for a few weeks in May - so we jumped at the opportunity and did it.


Hanin was a real sweetheart, performing like there's no tomorrow for way longer than we anticipated in beatuiful dresses by Trés Bonjour. But instead of complaining, during breaks she even gave us some really recommendable shoulder massages - so there is no crazy diva shit to be spilled.

What you hear in the video is the Tying Tiffany Remix of her classic "Future Noir" (2004) taken from her new album "Get it Back".

It's actually the second video made for the new record. Also, check out Donovan Vim Crony's clip for "Do You Know!!!".


Hanin will perform next at "Chauffer dans la Noirceur" festival in the french Normandie on July 14, 2011 alongside acts such as Public Enemy, Balkan Beat Box and Bonaparte. She'll hit the stage at around 11 p.m., which should work perfectly, no? 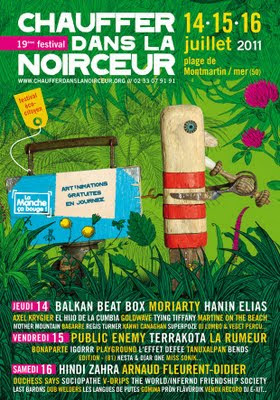 Curious what it looks like when she performs the new stuff? Check her official youtube channel and go through the snippets from her record release party on June 3 at HBC, Berlin.