This Year in Spring


What have people done in this case, back when I was a kid? Would they have released their movie on self-copied VHS alongside a fanzine xeroxed into obscurity? Hm. That does sound kinda good, I must admit. 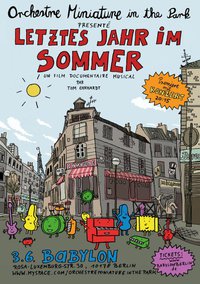 Oh, yeah... It's been almost two years since "Letztes Jahr im Sommer" ("Last Year in Summer"), the documentary about the Orchestre Miniature in the Park premiered at Kino Babylon in Berlin. Since then I have tried with various partners to put it out on DVD. Alas, we live in the land of the GEMA. So we would have likely ended up spending billions on music rights before anything happened.

Why, you ask? Oh, you should see the movie, I say.

It's packed with tons of cover songs about the sun and the summer: Velvet Underground, Weezer, Tocotronic, Phoebe Kreutz, Jonathan Richman, Claude François: all played through the 20 toy instruments of the band. And that 20-piece toy instrument band tours Paris for a week. Paris, France. In the summer. Playing, sweating, laughing. Scaring chickens, climbing rooftops and floating on rivers. Getting drunk and going home butt-naked. Putting memories for a lifetime into their heads and into those of the people they meet.

So here it is (drum roll): the premiere of "Last Year in Summer", the former documentary shown in a cinema as an English-subtitled web series. Free to watch!!! For everyone!!! Do I hear bottles popping? Damn right!

If the scope of your computer screen just isn't enough, you know what to do: write me an email and request a screening of the film in your area. I'm serious. The band might definitely come along and play a gig, you know?

I hope you have as great a time watching it as we had making it. Grab some friends and something to nibble and off we pop!

Posted by Tom Ehrhardt at 11:10 AM No comments:

One look at the past, one look to the future

One look at the past: At the very end of his successful tour, Marsimoto gave his fans a special treat on April 14, playing to a hundred of them at Fritz' studios. Everybody was supposed to wear green, which colorblind me failed at, of course.

For those not in the know, Marsimoto is the alter ego of German rap star Marteria. And whereas last August Marteria pondered on the eternal question, if the beat or the rhyme was there first, Marsi comes clean on all things green.

I could describe how great that intimate gig was, but the little piece I shot should be able to get that across by itself.

One look to the future: In a month that seems to be filled with people I shot before, I worked with the guys from Essenz on the teaser to their new album "Mundus Numen". It's quite a simple little bit and more about a sonic preview than flashy images, but because of that well worth checking out.

Posted by Tom Ehrhardt at 1:27 PM No comments: